One of the important answers the test unit must deliver is, how well the room temperature is controlled under varying outside temperatures and solar radiation.

The system monitors more than 50 different measuring points, recording temperatures, air pressure, water flow, humidity, solar radiation, pressure differences and more.  From these measurements it continuously calculates the balance of the individual heat inputs and losses in the HyWin box and in the room. The result is used to control the heat input or heat removal from the HyWin box by the heat exchanger.

The graph shows that despite the major differences between the night and day conditions, the room temperature preset to 22°C was maintained in a narrow tolerance margin of 0.7 K over the 20 hours shown here. 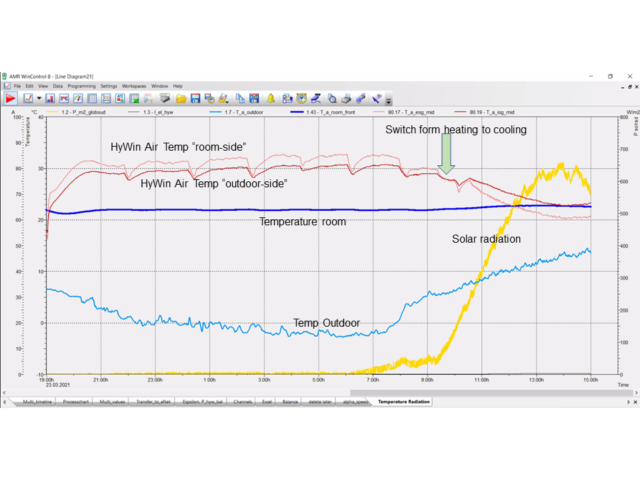 The HyWin was operated in the heating mode the entire throughout night. 0955 the system automatically switched to cooling mode for the rest of the observation time. The average air temperature (average of the two red curves) in the HyWin box went from over 30°C in the night to below 20°C in the afternoon. This mixed mode heat/cool is demanding for the automatic climate control.

previous
The new HyWin TEST UNIT is operative
next
What is the heating or cooling power of the HyWin facade?

HyWin is ready for industrialization.